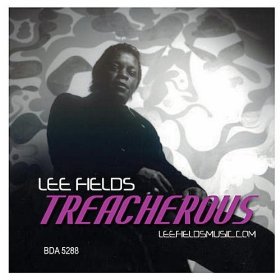 Leave no doubt that Lee Fields has been involved in the R&B, Soul & Funk music world for more years than most can count. Lee has seen things that would kill most folks having released multiple singles back in the 70’s on various independent labels. The funk and acid-jazz movement overseas brought out the DJ’s crate digging ways that revived the genre that Lee was an integral part of decades ago.  Lee used that as his calling to come back out in the 90’s and start recording once again to bring new material to the public eye starting the revival with 1995’s Coming To Tear the Roof Down and currently ending up at his new release Treacherous.

One look at Lee and you would immediately be disarmed into pigeonholing him as a “soul man” and you’d be only partially right. Lee’s voice is reminiscent of the raspy soul vocals that ruled the radio in the 60’s with The Stylistics and The Delfonics that was heavily popularized by the Motown sound. Lee’s new Treacherous album is backed by studio musicians that have performed on albums from as eclectic as The Dap Kings, Amy Winehouse, and even TV On The Radio.  The result of which is an album that gives everyone a taste of something they like.

Treacherous treads quite a bit on various styles of dance music and a good bit of which verges on techno. The opening track We’re Here To Turn It Out is a straight out dance track and one of the most techno of the albums offerings.  The album makes an unusual jump afterwards into a slow grooving bump and grind ballad titled I’ve Been Hurt with swooning keyboard strings and pads that would be appropriately placed in a candle-lit room with a couple glasses of wine and lingerie.  That is then followed by a slightly more upbeat mid-tempo ballad I Want To Get With You that’s reminiscent of a classic Billy Ocean ballad feel.

The next song on the album called Living For The Gusto is an unusual beast with a slight techno feel that brings the dance grooves back into the fray. It unusually uses the verse keyboard melody from the Duran Duran song Save a Prayer over its chorus while still maintaining the upbeat dance pace.  That song is immediately followed by Manhunt that continues the techno feel of the first track to insure that people don’t think Lee is a one trick pony in the techno dance realm of music.

Treacherous then jumps the track and moves to a reggae tinged song titled He Doesn’t Care About You which has the vocal styling of The Temptations and eloquently captures that 60’s soul sound that speaks to rumors designed to destroy relationships.  As does the following track, the saxophone fueled At The End Of The Day that serves as the perfect follow-up.

The stand-out song of the album is the foot tapping, butt-wiggling Dance Like You’re Naked.  The song has shout outs and chants in the groove of James Brown along with horn stabs that would make Maceo proud. It couldn’t have been more JB sounding if James had penned it himself. If this song was floating unattached to this album, people would immediately claim it as a lost JB song straight down to the clean guitar riffs reminiscent of The Payback.

The album is then closed out with yet another 60’s soul feeling song called I Want You So Bad, but with an added Caribbean taste and then finished up with an instrumental version of the opening We’re Here To Turn It Out.

For fans of 60’s soul, Lee’s primary influences come through here.  Fans of Lee’s previous work won’t be disappointed. The biggest challenge for the album are the varying audio levels due to mixed production assistants on the various tracks.  There are other notable issues with the CD, but none that affect the quality of the collection. Overall, it’s a great CD, but with exception to a couple of tracks, it won’t itch the funk scratch.  But if you love the sound of 60’s soul and a nice dance mix, you shouldn’t hesitate since Lee Field‘s vocals really shine on this album.

Listen to sample tracks and purchase it from Amazon here; Lee Fields – Treacherous. You can also catch Lee performing across the globe by visiting his Tour Page on his website at http://www.leefieldsmusic.com.