What do you get when you pull together 60+ funk musicians to create a funk album masterpiece? You get a Big Ol’ Nasty Getdown. The Big Ol’ Nasty Getdown – Volume 1, or BONG for short, project was the brainchild of John Heintz from Trulios DisGracias, along with John Paul-Miller and Derrick Johnson from Yo Mama’s Big Fat Booty Band.  George Clinton and the late Garry Shider of Parliament-Funkadelic fame soon came on board to give it the extra name recognition it needed to get the publicity machine rolling.  The idea was to gather some of the most amazing funk musicians from around the planet to collaborate on a musical project that would serve as a virtual Who’s Who of the funk world and that may also become a funk encyclopedia of sorts as the effort gains more volumes.

As mentioned, the B.O.N.G. project consist of many musicians. Who, you ask? Ok, a sampling of who contributes to this album would be members of P-Funk, The Meters, Galactic, Dirty Dozen Brass Band, Yo Mama’s Big Fat Booty Band, Funkadelic, Parliament Funkadelic, SciFi, The Lee Boys, Big Sam’s Funky Nation,Trulio Disgracias, The Soular System, Derek Trucks Band, Ralph Roddenberry Band, Blackalicious, Cosmic Sweat Society, and literally tons more that were involved like George Clinton, Frank Mapstone, Kendra Woods and others, which you can view track by track here.

The album is 11 tracks of some of the funkiest grooves that we’ve heard in a very long time. Smooth funky New Orleans style funk that bleeds through every track with nary one oddball in the bunch. And even though 11 tracks seems short, there is almost a full hour of music here thanks to long play tracks such as Platinum, The Beauty of Pretty, and the 8:30+ Wake Me Up.

The vocals are contributed by a variety of performers. On the female vocalist side, the microphone is shared by Laura Reed, and also Belita Woods and Kendra Foster of P-Funk notoriety. Of the men who share vocal responsibilities, you’ll hear a healthy does of George Clinton, and the funky bassy voice of Michael Clip Payne (who provides the albums opening funky title track). Then there’s the Richie Havens style of Ralph Roddenberry, Reverend Desmond D’Angelo, Sidney Barnes, and even some rapping on the closing track Amplify by Agent 23 and The Gift Of Gab. And it goes without saying that background vocals are shared by many. 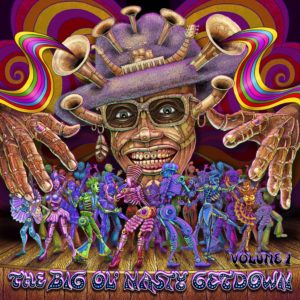 There were many musicians involved in the writing process and that varied input is evident in the delivery since there are some continuity issues, but the storytelling is not this albums strong suit anyway. It’s the common thread of funk that carries from track to track displayed in various shapes, sizes and presentation that really weaves an incredible tapestry of formidable funkafied fortitude.

All being said, this album is hard to explain, but it fills the void for funk music fans and even serves to introduce you to some acts you may not have otherwise discovered which is the Big Ol Nasty Getdown‘s strongest positive aspect.  We have no choice but to give the Big Ol Nasty Getdown – Volume 1 a 5 out of 5 afros and we can’t wait to hear the forthcoming future volumes. We hope that they’ll reach out even further and include even more musicians from other deserving funk projects.

You can follow their exploits on their blog at http://bigolnastygetdown.wordpress.com as they do live shows from time to time, as well as get updates into more volumes and member updates. Visit their Facebook page here to get some free music off of the album and also be sure that you hit up Amazon to pick up a copy at your earliest convenience! We’re told that the official street date is May 22nd.