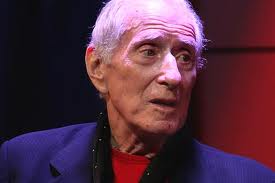 This makes 2 music icons that died in one day. Nick Ashford of Ashford & Simpson and now songwriter Jerry Leiber has died of cardiopulmonary failure. He was 78.  Jerry had joined forces with Mike Stoller to push out some of the most amazing songs that will live on forever in infamy.

The pair has written classic songs for Elvis Presley, The Drifters, The Coasters, and many more R&B superstars. Most of which would not have even attained the label of superstar if it wasn’t for Leiber and Stoller. The two had such an amazing string of hits, that they even created a Broadway play entitled Smokey Joe’s Cafe strictly to honor their contributions to music.

Leiber and Stoller were responsible for hits such as Stand By Me,  Jailhouse Rock, Young Blood, On Broadway, Yakety-Yak and countless other classics including the Leiber-agitating Hound Dog that is “thorn in the paw” for Leiber who was very annoyed at the liberties that Elvis Presley took with the song and specifically the lyric “You ain’t never caught a rabbit”.

“To this day I have no idea what that rabbit business is about,” he said in 2009. “The song is not about a dog; it’s about a man, a freeloading gigolo. Elvis’ version makes no sense to me, and, even more irritatingly, it is not the song that Mike and I wrote. Of course, the fact that it sold more than seven million copies took the sting out of what seemed to be a capricious change of lyrics.”

Rolling Stone did a fantastic coverage piece on Mr. Leiber on their site and it’s worth a read for nice insight to Jerry and his contributions as well as his obsession with “wanting to be black”.  Rest in peace to one of the greats.