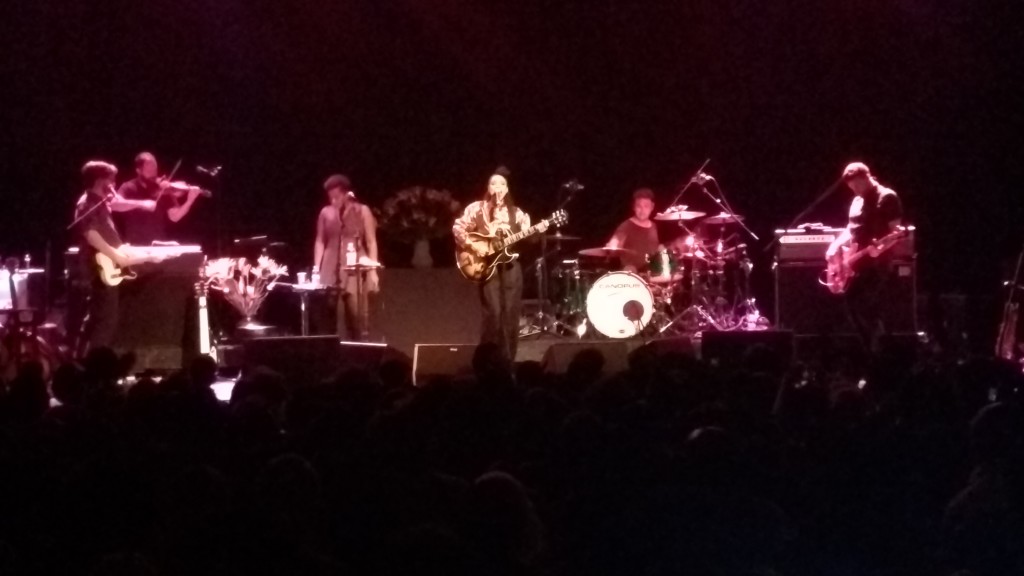 Keenan O’Meara is a ballad-heavy performer in the vein of Vance Joy that played for about 35 minutes to an extremely welcoming crowd. He went solo with an acoustic guitar and then migrated to electric midway through the set. His songs are along the lines of the aforementioned Vance Joy with brooding lyricism and slightly darker tones layered with thought provoking topics. While his music was a bit removed in style for Lianne La Havas, the crowd made him feel completely welcome. He was the original vocalist on Lianne’s track Wonderful from her new album Blood.

By the time Lianne hit the stage, the crowd was ready. This was one of the first sold out shows I’ve witnessed at Center Stage which holds just over 1000 and the crowd was insanely enthusiastic and energized to see her. The energy and hype was mind-blowing as you can see in the video below and when you have such an over the top reception to your performance, the delivery just gets increasingly better.

The setlist (shown below) was a perfect mix of new and old material. There were a lot of great moments including Lianne showing off her mastery on acoustic guitar and doing solo work on songs like Tease and No Room For Doubt. Even briefly forgetting the lyrics to Au Cinema which was segued into a great slowed down version of Happy was incredibly endearing and real and made the evening that much more magical.

Nearing an hour and 15 minutes, Lianne apologized for not having a lot of material to play all night, but this was truly one of those nights where she left them wanting more. Even if she had played all of her material from both albums, the crowd was insatiable enough to have demanded more and easily would have stayed until the wee hours just to hear her voice.

Lianne still managed to return for an encore to solo with an electric guitar on her songs Age and Ghost. She then was joined by the rest of the band for a closing rousing ode to her ex-boyfriend to blaze out Forget with huge crescendos.

This was one of the best caffeinated performances we’ve seen at Center Stage and her recent alliance with Prince over the past year or so has created a literal audio landslide that will catapult her into top 40 status in the very near years to come. Pay attention. It’s coming.

Meanwhile here is the setlist and a taste of what you missed and you missed plenty.