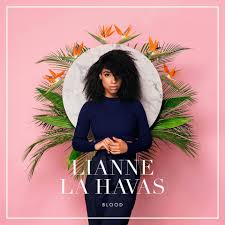 One of the benefits of frequently going to concerts is that every now and then, the artist will bestow upon you an awesome gift. In exchange for me purchasing a VIP ticket to Lianne La Havas‘s show in Atlanta in October was a download of her new album Blood as soon as it hit the streets, which was today.

God’s honest truth, I swear that Lianne’s first album Is Your Love Big Enough was easily one of the best albums I had heard in many years, so I was expecting no less from her newest release that’s been over 3 years coming to the month.

The new album features a lot of great surprises like the album opener Unstoppable which was built on top of an instrumental from the trio The Invisible. A thick and richly chocolate infused groove. Plus that the song Green and Gold was cowritten and coproduced by one of our favorite performers, Jamie Lidell.

The entire album is full of incredible rich production that fills the sound waves with smooth wide bass riffs, soft drum patterns, intricate acoustic guitar walks, and vocal layers poured over like syrup on pancakes. All of which blend to create a vibrant handheld tour through a very broad and detailed pallette of colors.

All of the songs stand on their own as powerful testaments to heavy production work. The overall result is a full neo-soul release said to be inspired by her Jamaican and Greek roots although there’s no reggae infusion to speak of. Although all of the songs serve as a standard as the perfect background music to digging your toes into the sand.

Some highlights include the track Wonderful which features Disclosure‘s Howard Lawrence who brings the same breadth of vibe that he helped deliver on Latch with Sam Smith.

Midnight is one of a few featured upbeat tracks that showcases Lianne’s vocal reach as she hollers and stretches her range to take it into another realm not previously recorded on any of her previous releases which makes it all the more surprising.

From the locomotive rush of Grow to the surprising Never Get Enough that jumps back and forth from ambient acoustic to a muffled techno rocker, the album is riddled with brilliance. Haunting acoustic guitar work trickling all over on tracks and gorgeous strategically placed string sections in songs like Good Goodbye that continue to fill out her acoustic stylings that made her first release such a dominant presence in the music world.

This album has hits all through it like the already released single of Unstoppable and even the amazing catchy What You Don’t Do.  Terrestrial radio will undoubtedly ignore this yet another great release and we’ll all scream “Travesty!” that will fall upon deaf ears.

If you have to have the best of what’s left of the neo-soul movement with current tech edged flavor and gorgeous vocals from a beautiful woman who is filled with passion and verve, look no further than Lianne La Havas‘s newest Blood offering.