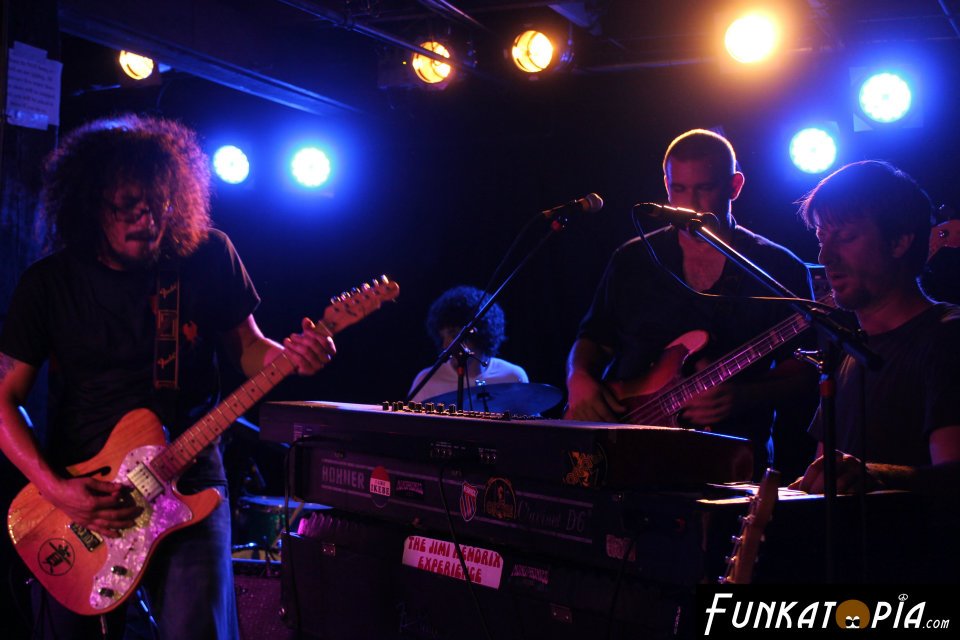 Don’t forget to check out our exclusive interview with Sergio here!

Los Angeles based band Orgone is relentless when it comes to touring. The band has been non-stop in its quest to bring the funk for well over a decade and they don’t seem to show any signs of stopping that trend as they hit a club called The Masquerade in Atlanta, GA on June 18th, 2012 with opening act, the Atlanta based J. Lloyd’s Mashup. 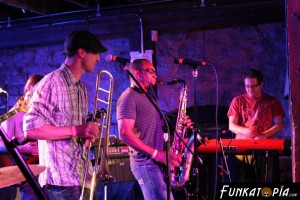 J. Lloyd’s Mashup was insanely surprising as they ripped through a blazing 50 minute set filled with great upbeat jazz funk. The band is a chameleon of sorts with frontman Jonathan Lloyd on trombone and in this particular set, one lead vocal.  Every instrumentalist was superb as they trickled through various original songs and a couple covers.  The most surprising was when Jonathan opened his mouth to sing Work To Do from The Isley Brothers. Everyone was taken aback as his vocals were crisp, clear and soulful somewhere between Paul Carrack and Gavin DeGraw. If there was anything negative with their performance that night, it’s that he only sang one song with those gifted pipes.

J. Lloyd’s Mashup‘s are becoming increasingly popular since they are a culmination of some of the best instrumentalists in the region who all join together simply for the love of creating music. We’ll be in waiting for any recordings that happen to rise up as a result of their work. We recorded the entire Atlanta show (as well as Orgone’s) and they have given us the blessing to release it for you which we will do very soon and truth be told, you must hear it. And for those in Atlanta, keep out a watchful eye for them to do shows in the area.  This particular Mashup consisted of Jonathan Lloyd – Vocals/Trombone, Anton Harris – Tenor Sax, Khari Cabral Simmons – Bass, Chris Burroughs – Drums, Nick Rosen – Keys, Nick Johnson – Guitar, and Rock Most – Turntables. 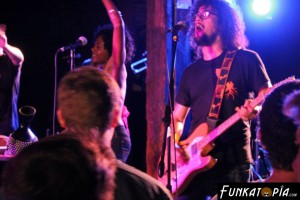 20 minutes the later, the stage was taken over by Orgone who performed their first two songs in minimal lighting to set the mood. Lead guitarist Sergio Rios was literally drenched in sweat before those 2 songs were even completed. Fast forward through the evening and you would be surprised that he was still conscious with as much body fluid as he lost during the entire performance.  His energy during the entire show is non-stop as he moves and grooves through each song as if his body is weaving in and out of the melodies.

Their constant touring has also landed them in unique situations such as placement in Bonnaroo 2012. But many don’t even know that collectively, the group has performed on tracks by Cee Lo Green, Alicia Keys, Estelle, Anthony Hamilton, The Pharcyde, Macy Gray, Booker T. Jones and many more. So to find them among some of the greatest performers of our time isn’t unusual for this group. 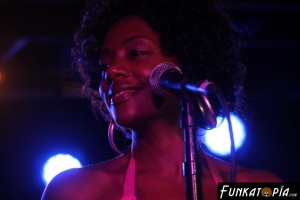 Sporadically joining them on stage for tunes throughout the night was their new vocalist Niki J Crawford who has only been on board for under 2 years, but her presence is well received by the audience. Her vocals are VERY reminiscent of the clean stylings of N’Dea Davenport of Brand New Heavies fame. There are no empty spaces and her beautifully crafted vocal melodies are impeccable. Not to mention that her stage presence is stunning. She commands your attention from the time she steps on the stage until she has sung her last note. While it’s my job to find the errors, there simply are none with Niki.

Additionally brilliant are the Orgone band members that have played together for so long that they know all of their mannerisms. So much so that when J. Lloyd did a guest sit-in on a song, Sergio immediately noticed that the trombone style was not the same delivery and peeked back to see what had changed.

The layered attacks of Orgone‘s music is what has garnered them such a rabid following. They start with infectious beats supplied this tour by the afro donned Sam Halterman and master percussionist Stewart Killen. Then Sergio Rios adds his signature guitar riffs while bassist Tim Glum laid on thick bass lines. Then come the luscious jazz melodies of piano boss Dan Hastie.  Then to add to the mixture, you get trombone from the cowboy outfitted Darren Cardoza and new trumpet player Lucky Brown. Add the rich vocals of Niki J. Crawford and it’s an insanely addicting funk flow. 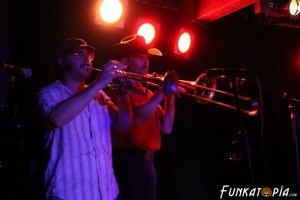 The band dipped into all of their library including Sophisticated Honky, Funky Nassau, Sandstorm and a handful of new songs from an album called New You that is yet to be released (which we discuss in our exclusive interview with Sergio). The flow of the entire night was perfect with no sleepy moments and a perfect blend of song arrangement and mood vibe control.

All in all, we have to give this show a 5 out of 5 afros. If Orgone comes through your neck of the woods, you simply must take in the show. Just know that if it’s on a weeknight, they have no sympathy for you if you have to work the next day. When the funk train is rolling full steam, you simply can’t derail such a beast.